Currency Strength Meter is described as a graphic guide that reveals which currencies are presently strong, and which are feeble (weak). Currency strength indicators make use of exchange rates of various currency pairs to generate a comparable, aggregate strength for each currency.

Modest meters may not make use of any weighting, but more advanced ones could apply their weightings. Besides, other top 10 mt4 Indicators could be combined with the meter to deliver Trading signals.

How Useful Is Currency Strength Meter?

Currency Strength Meter is useful as a swift guide to which currencies a trader might want to trade, as well as which might deserve avoiding. For example, if a particular currency is quite strong, and another unexpectedly turns weaker, you might see a trading opportunity. While deviations like that between currency pairs often signify momentum.

On the other hand, if two currencies are weak, average strength or strong, there is usually a sideways movement or range happening. Hence, it is safer to stay away from such pairs.

How Frequent is the Meter Updated?

It is updated EVERY MINUTE by checking the real-time forex data. Changes are always reflected when the page is refreshed.

Example of the Meter Analysis

From the picture below, the CAD, CHF, NZD are quite weak, the USD is quite strong, the GBP is significantly strong, and the EURO is the weakest among the three. 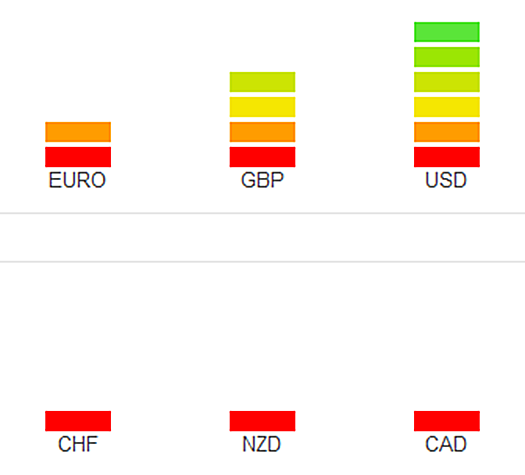 With this information, let’s look at the prevailing chart below for USD/CHF as of the time of making this analysis. It’s evident that for the past five hours, the quite strong upward trend of USD (Strong meter data) as against CHF (weak data from meter).

Taking a position in favor of USD would have amounted to a decision. 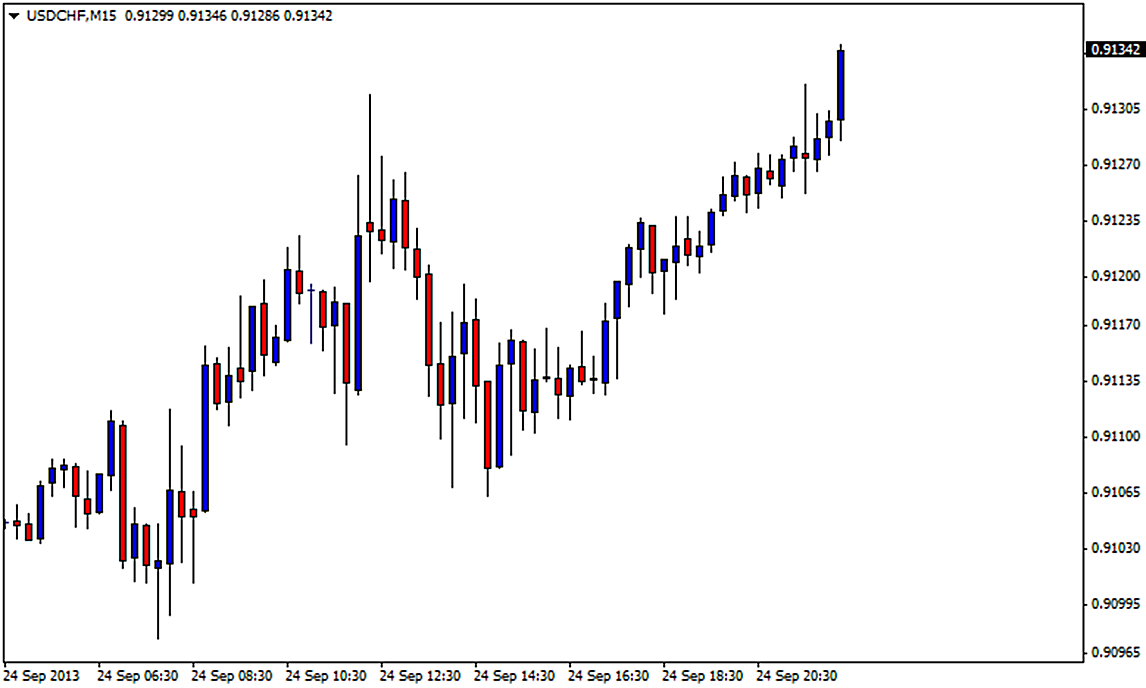 Take a look at EUR/USD behavior from the following chart, for instance. Once more, we find a similar move down in EUR (weak meter reading) against USD (strong Currency Strength Meter reading).

While the move was not very strong, as EUR wasn’t completely red with a bar just like the other instance (CHF) above. 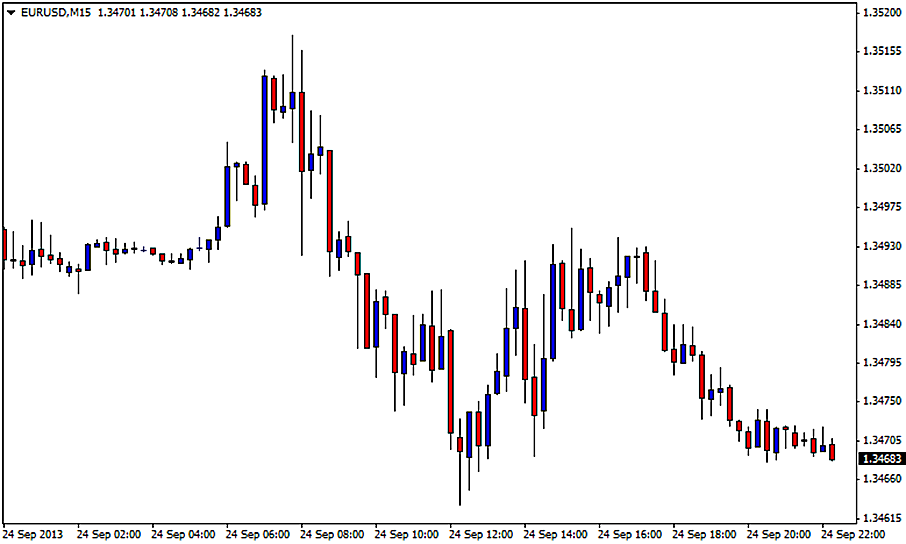 Consider another pair – EUR/GBP. As can be seen in the chart below, the price dropped for the second half of the trading day versus the weaker between the two pairs (EUR); however, not in an aggressive manner.

This is so because the reverse pair (GBP) wasn’t much stronger overall. Note that stronger moves occur when two opposite ends of the gauge are affected in strength. 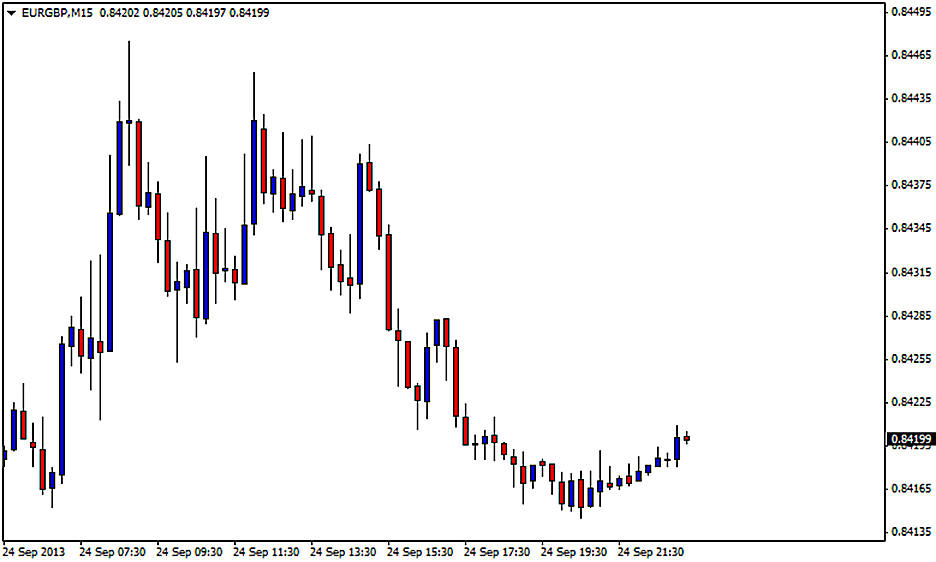 ‘Correlation’ in financial language, is the mathematical measure of the relationship concerning two variables (for us, Forex pairs). Range of correlation coefficient is with the range of -1 to +1. Correlation of +1 implies the two currency pairs will change in the opposite direction one hundred per cent (100%) per time. Furthermore, the correlation of zero means the connection between the pair is arbitrary. 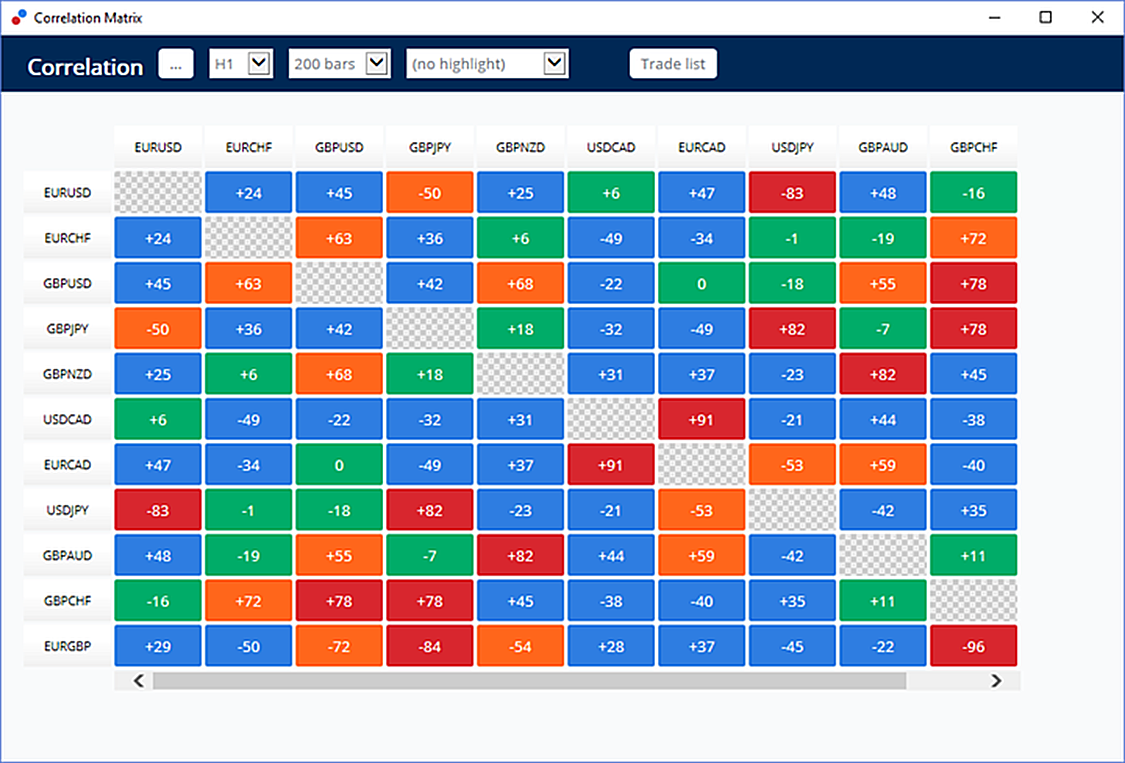 From the matrix above, the following can be identified:

From the matrix above, currency correlations are also separated into four groups in line with their strength:

These are what the data implies:

Correlation is little or non-existent. Positions taken on these symbols will likely move individually and make a profit, which is not connected.

Correlation is little or non-existent. Positions taken on these symbols will likely move individually and make a profit, which is not connected.

Correlation is weak. Positions taken on these symbols will likely move individually and make a profit, which is not connected.

Correlation is weak. Positions taken on these symbols will likely move individually and make a profit, which is not connected to each other.

Correlation is Medium positive. Positions in a similar direction on these shown symbols will likely yield similar profit. Taking positions in the opposing direction will likely offset each other.

Correlation is Medium positive. Positions in a similar direction on these shown symbols will likely offset each other. Positions in the opposing direction will tend to produce the same profit.

Correlation is a strong positive. Positions in a similar direction from these symbols are very possible to have the same profit. Positions in the opposing direction will offset each other.

Correlation is a strong negative. Positions in a similar direction on these shown symbols are likely to offset each other. Positions taken in the opposite direction will produce the same profit.

From the matrix shown above, it can be easily noted that CAD poses as the strongest currency, given it displays a +91 correlation.

In the image above, we can see that the CAD is the strongest currency, as it shows a +91 correlation amid the USDCAD and EURCAD. Additionally, the weakest correlation is noticed between EURGBP and then GBPCHF at -96. Hence, this implies that the concurrent positions in this currency pair within a similar direction are quite likely to offset each other.

With regards to currency strength, this shows GBP strength as well as that Swiss Franc happens to be the weakest currency. Clearly, it’s a relatively modest concept that affords a trader the liberty to evaluate the raw power or strength of currency on its own, as against seeing how it is performing versus another currency.

Problems With The Currency Meter Indicator

Sadly, the Currency Meter Indicator has a few challenges as an indicator, especially when they are insufficiently coded. If a particular Currency Strength Indicator does not produce precise currency strength indicators values, it will be of negligible use, irrespective of any feature that it has. A trader could experience the following if the meter is outdated:

Certain products may even generate data that has moved from the initial idea of what currency strength means. Some use smoothing filters such as moving averages, whereas some make use of other filters (e.g. MACD and RSI).

While the actual best means to determine currency strength lies with currency correlation. Since a Forex correlation matrix is adequately coded utilizing the latest technologies, the above-listed issues will be unlikely.

Can The Currency Correlations Change?

A very critical question since the market is dynamic. It’s imperative to realize that these can alter. As we all know, global economic factors remain ever-dynamic – they really can and change on a day-to-day basis. While correlations between 2 currency pairs could vary over time; hence, a short-term correlation could contradict the expected long-term correlation.

Considering correlations on the long term basis provides a more precise understanding concerning the relationship amid2 currency pairs – such is very likely to be a more exact and decisive data point.

This explains why correlations calculations should be done regularly, and a tool such as MetaTrader Supreme Edition correlation matrix is quite helpful –it automatically updates correlations of currencies in real-time.

Getting the Best Out of the Meter

As earlier stated, correlation changes, the following can guide in developing a winning strategy, and they are:

1. Dodge positions that offset each other: when you notice two pairs that move in opposing directions nearly all the time, understand that taking long positions in the two currencies reduces any potential profit that could be made.

2. Diversify with marginal risk: In investing in 2 currency pairs that happen to be nearly always positively correlated, a trader can reduce risks over time, however, maintaining an optimistic directional outlook.

3. Hedge exposure: a trader can reduce losses by hedging 2 currency pairs that maintain a near-perfect negative relationship/correlation. This is because if you take a position with one currency pair that drops value, the opposite currency (with a negative correlation with that pair) is likely to gain, although with a lower closing value. This strategy does not eliminate losses but will surely reduce them.

Currency Strength Meter reveals the comparative strength of various currencies as at the time of consideration. It informs the trader of how a particular currency is faring, which will inform his decision of position in the market. They have over time, evolved into correlation matrices known as Forex correlation Matrix, which has the potential to produce more accurate and elaborate information for a trader’s use.

A proper application of the matrix would assist the trader in avoiding losses and maximizing gains. Therefore, always make your trade decision with Currency Strength Indicator after consulting other Indicators, tools and techniques to balance your decisions. Indicators work best when combined with others.

Our website boasts of a range of tools as well as Indicators that any kind of trader would see as very helpful in advancing his Forex trading skills and increasing gains. Thus, take advantage of visiting and better your earnings.